One of our friend, lets call her 'A', is very famous for her funny cooker stories in our friend circle. She has about 5 cookers in her kitchen but only one works (at least it did when I last spoke to her). One doesn't have gasket working, other two don't have safety valves. She forgot to add water in one and other was on stove for very long time. Fourth one is old and I am not sure what is wrong with it. All these four cookers are of different sizes and are made by four different pressure cooker companies in India. Recently one of our friend 'V' was visiting India and A asked her to get some gaskets and some valves. And on the second thought she actually asked her cousin to drop it off at V's house to save her a trip to store. Cousin left with a big package and V thought it might have some goodies like bakarwadi, pedhas etc. V had to open the package up as she couldn't fit that in her bag. All she found was various sizes of gasket, various valves, various whistles and every spare part various cookers might need! We laughed like crazy when we got together after that. And A was the first one to crack the jokes about her own cookers!
On the other hand, I did not want to carry big cooker from India so I bought Hawkins Futura from local Indian store. That cooker is with me from past few years. I typically use it once or twice a week. I have another small pressure cooker that one of my friend gave me when she left for India. I use that to cook things in it directly as it is nice and small.

As soon as I saw Nupur's new event called 'Blog Bites: Pressure Cooker', I knew which recipe I wanted to submit. Last year Manisha posted this quick 'pressure cooker daal' for holi and I have been making vegan version of it. Recently I bought 16 beans soup mix on a recommendation of a friend. And wanted to try something Indian too with the mix. Manisha's quick daal recipe was a perfect choice for it. All I changed was use oil instead of ghee and use mixed beans instead of whole moong. As moong cooks very quickly two whistles are enough but with beans kine cranberry beans, fava beans, I had to make four whistles. As anyone can guess, results were amazing. So here is Manisha's recipe with my changes. 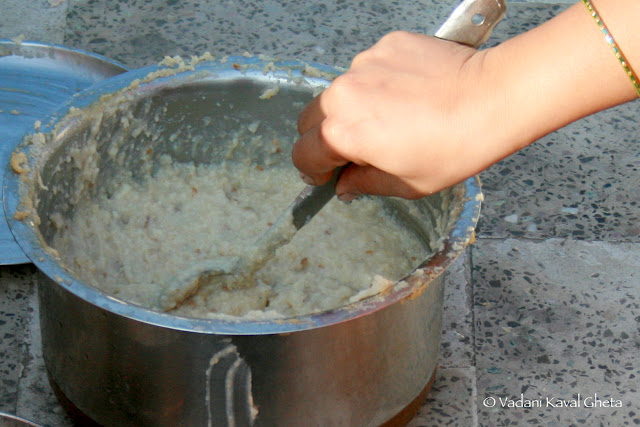