Buttermilk kadhi is a made all over India and all the regions have their own way of making it. Maharashtrian kadhi has fresh coconut, ginger, garlic and turmeric powder is used in tempering.  Punjabi kadhi has pakodas or fritters and has bit of thick consistency. Gujarati kadhi is sweeter and flavored with cinnamon, cloves. Kadhi from Karnataka is somewhat similar to Maharashtrian style but sometimes made with snake gourd or okra.

Khandeshi kadhi is very different that all these varieties. Even though Khandesh is part of Maharashtra, the kadhi is made bit differently. Traditionally, ginger, garlic and green chilies are roughly ground together and mixed with ghee. Kadhi is made in earthen pot. And tempering is made with live coal. The ghee-masala ball is carefully put over live call and as ghee starts melting, lichen, mustard seeds and cumin seeds added. Once mustard seeds start spluttering, everything including coal is poured in boiling kadhi.

This kadhi is made as an accompaniment with another special dish called Funake or Vafole. I will share that recipe very soon in another post. 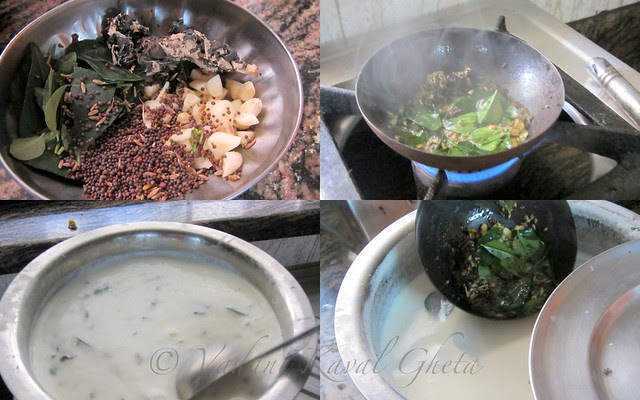 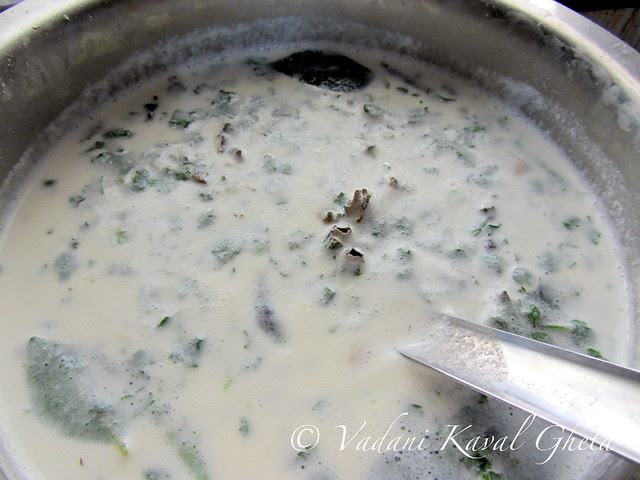 Preparation -
Make buttermilk by churning yogurt and water together, making sure there are no lumps of yogurt left in the prepared buttermilk. Add little water at a time. Now add salt, sugar and cilantro. Mix besan and remove the lumps if any.
Now keep the this kadhi mixture on low-medium flame and keep stirring almost constantly while kadhi thickens a bit. Do not increase the heat to make kadhi faster it can curdle.

Grind green chilies, garlic and ginger into rough paste without using any water. Mix that with solid ghee and keep it in a plate. Keep mustard and cumin seeds in the same plate. Also keep the Dagadfool and curry leaves in the same plate

Once kadhi/buttermilk mixture comes to boil, heat small kadhai. Add ghee-masala mixture to the hot kadhai. Ghee will melt with a minute then add dagadfool, curry leaves,  mustard seeds and cumin seeds. Once the mustard seeds start spluttering and ginger garlic turns golden brown, add this tempering to boiling kadhi. Let it boil just one more time and turn off the heat.

Enjoy with simple khichadi or Funake.