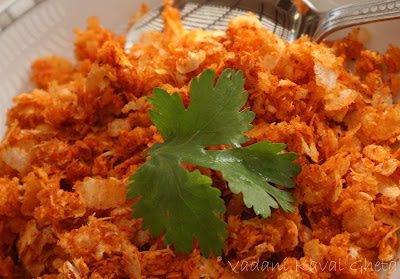 It was about 3 years ago when I had taste of this poha for the first time. I was visiting my cousin in Bangalore and she decided to give me the taste of Kumatha Pohe. Her mother-in-law in from Kumatha and is an excellent cook. I was curiously watching her make this: Few ingredients  - Patal Pohe (thin poha), some jaggery, salt, nice fresh raw coconut and bright and red masala powder. She asked me if I can eat some raw onions that early in the morning, I said - it depends! She decided to make some with raw onion and some without.

That masala was something different from  anything I had tasted before. Around Kolhapur, Belgaum  you get this bright and red variety of a chilies called as 'Bedagi/Byadagi' not very hot but flavorful. If you use even a small amount the whole dish looks very red and this masala had this chili powder.
Finally I had these pohe and believe it or not I totally fell in love with the taste. My cousin offered some masala to take with me to US but unfortunately I forgot the pouch and landed here.  I called her to ask about the ingredients and her reply was simple - It comes from Kumatha! HAHAHA!
Now I was desperately searching  for the recipe and after about 2 years or so I happened to see it on Shilpa's blog. I tried it immediately and successfully recreated the same taste. 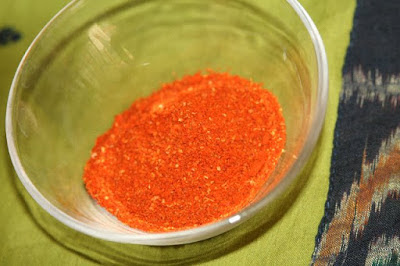 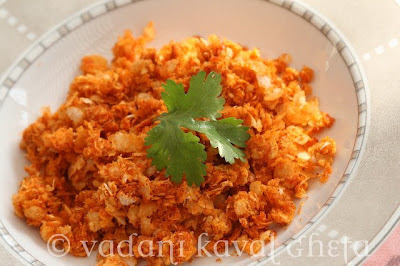 I also followed the same recipe that Shilpa has!! Simple ingredients and so flavorful. Thanks to Shilpa!