Traditionally Maharashtrian ladies give away something at the Sankranti Haldi-Kumkum. This year I was also invited to Sankant Haldi-kumkum at The Cooker's home. I was little curious to see what snacks she will serve. She had Samosas and Dhoklas Also served some coconut macaroons. She made Orange cake specially for vegan people like me (She has promised she will post the recipe soon :) ). Then I was wondering what will be in the loot bag. May be some fruits, some cool utensils or somethings like that. But then I saw the bag of masalas and I was surprised. It was  gift bag had four small bags filled with different masalas, Kolhapuri Kanda Lasun Masala, Malawani Masala, Kaccha masala and Flax seed chutney.
I wanted to try the masalas immediately but got busy whole of last month and couldn't even open the packs.  Finally I opened it few days ago but did not want to cook anything elaborate. After giving some thought, I decided to try Kanda Lasun Masala in the simple Onion-Potato curry called rassa bhaji. I had posted this recipe on Maayboli few years ago and people who tried had liked it very much, at least thats what they told me ;) 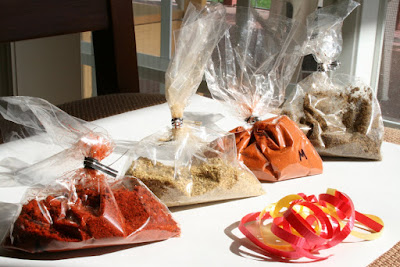 Here is the recipe - 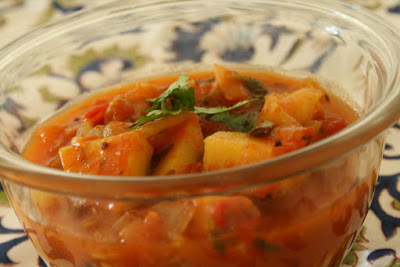 Preparation -
Cut onion, potatoes and tomatoes in same size (approx. 1/2" cube).
Heat oil in vessel and make tempering as usual. Now add chopped onion and saute till golden brown.
Add chopped tomatoes and saute for couple of minutes and then add salt, kanda lasun masala, ginger garlic paste and saute till tomatoes are cooked well and oil starts coming out.
Then add potatoes and fry for couple of minutes and then add cup of warm water.
Lower the gas heat without covering the vessel and let the potatoes cook well. This will ensure some red oil floating on the sabji, called tarri or kat in Marathi.
Add chopped cilantro. Serve with warm chapatis or rice.